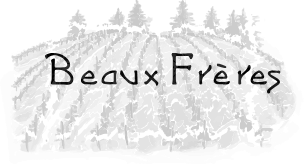 The Beaux Frères story began in 1986 when Michael G. Etzel, then a wine salesman

in Colorado Springs, embarked on a road trip to Oregon with his young family after reading an enticing review of an ‘83 Pinot Noir from the Willamette Valley. They took a whimsical detour to check out a foreclosed 88-acre pig farm about 20 minutes from their destination and, upon seeing the idyllic hillside, cute little bungalow, and lush pasture at the top
of the dirt road, began to wonder: Could a quiet, wholesome farm life growing grapes for the blossoming local wine scene be possible? With an investment from Michael’s sister Pat and her husband, wine critic Robert Parker Jr., the dream began to take shape. (The name Beaux Frères refers to the French idiom for “brother in law.”)

About the Vineyard
Several years back, we began exploring the ideals of biodynamic farming. We have found that avoiding commercial sprays in favor of gentle tonics like dandelion and stinging nettle tea leads the way to a symbiotic relationship with our landscape. We compost on-site, graft our own cuttings, and take great care to observe and connect with the vines regularly.

The Beaux Frères Vineyard is located on an 88-acre farm atop Ribbon Ridge near Newberg (Yamhill County, Willamette Valley, Oregon, USA). Tall and stately Douglas fir trees cover nearly 50 acres of the farm, with homestead and winery buildings occupying another 8 acres. The vineyard is situated on 30 acres (24 of which are planted) of steep, contiguous southeast, south and southwest facing hillsides of Willakenzie soils at elevations of around 400 feet. Planting began in 1988 with tightly planted Pinot Noir vines spaced at a density of about 2200 plants to the acre. The oldest vines in the vineyard are now a seasoned 31 years of age, and the vineyard as a whole is a mixture of own-rooted Pommard and Wädenswil clones and younger Dijon clones on phylloxera-resistant rootstocks. We reserve the right to adjust wines without advance notice. Must be an adult 21-yrs of age and older to purchase. Wine kit purchases are not guaranteed to arrive before the Zoom start time; please refer to our shipping policy. All sales and purchases are final, no refunds, credits, or returns.