About The Producer
Terredora di Paolo descends from one of Italy’s most important winemaking families — Mastroberardino. In 1994, the original estate was split between two brothers: Walter and Antonio Mastroberardino. Antonio is frequently credited with preserving many of Campania’s indigenous varietals — especially Fiano and Aglianico — but it was Walter who, in a deft move, kept many of the family’s best vineyard plots after the schism. Antonio kept the winery and the family name while Walter named his new estate after his wife, Dora di Paolo.

About The Wine
To the careful selection of the grapes, it follows vinification with maceration on the skins for 10-12 days at 28 ° C. Once the alcoholic and malolactic fermentation is completed, the wine matures in small French oak barrels for 18 months, to continue, after the blend, aging in oak barrels for at least 6 months and in bottle for 24-36 months.

Tasting Notes
Intense ruby color with garnet reflections, pronounced and complex bouquet with hints of cherry, fruits of the forest, spicy scents of violet and tobacco and a suggestion of minerals. Elegant, smooth, velvety and intense it displays characteristic hints of plums, black cherries, black pepper and tar. It is full bodied and austere on the palate with balanced tannins and acidity. It will continue to age and develop for more than a decade. Food pairings: It is an excellent accompaniment for roast meat, game, spicy dishes, truffles and mature cheeses such as seasoned provolone, parmigiano or gorgonzola. Serve at 18° C.

These scores may not be applied to the 2012 vintage.

This plush Taurasi still has a lot of life left as it leads with notes of dried elderberries, dried meat, steak tartare, cigar box and dried cedar. Full-bodied, tannic and earthy, it is an uncompromising style of red with enormous concentration, but some verve on the long, chewy finish. Drink from 2023.

Mouthwatering prune and cherry notes, a bold structure, intense tannins and classy oak with a leather and chocolate finish.

ABOUT Taurasi Wine from WINE-SEARCHER.com

Taurasi DOCG is a red wine appellation in Irpinia, a sub-region of Campania, southern Italy. It is located 50 kilometers (30 miles) northeast of Naples, where the vineyards sit among the Apennine hills of Avellino. The wines are based on the Aglianico grape variety – the name comes from Ellenico, meaning "Greek".

Aglianico's success here is largely due to the terroir and topography of the Taurasi zone. Its vineyards lie at least 400 meters (1300ft) above sea level, and many of the best sites (Castelfranci, Jampenne, Radici and Torre) are found at higher altitudes. 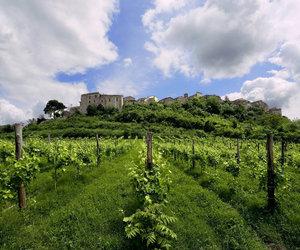 There are many soil types including calcareous marls, volcanic deposits and limestone. The latter contributes firm tannins to the wines, while the volcanic soil adds a certain smokiness.

Taurasi first gained its DOC status in 1970 and was promoted to DOCG in 1993. Under these regulations the wines must comprise at least 85 percent Aglianico from the province of Avellino. The remaining 15 percent can be made up with other permitted local red grapes, usually Piedirosso and sometimes Sangiovese and/or Barbera. The majority, however, tend to be pure Aglianico.

The wines must be aged for three years before release with a minimum of one year in barrel. Riservas require a further one year with at least 18 months in oak.

Along with Aglianico del Vulture in Basilicata, Taurasi wines are considered the southern Italian equivalents of Barolo and Barbaresco. They are full bodied with a great ability to age – some can reach 20 years. Despite their density, high levels of extract and tannin, they retain good linearity and finesse.

Aglianico wines tend to flavors of raspberries, plums and black cherry. There can also be smoky notes evocative of a lit cigar, freshly ground coffee and new leather. As the wines mature, they can take on earthy, forest-floor and gamey notes. Although they can be drunk young, a little patience will smooth out the rough edges.

Like many of Italy's wine regions, the Taurasi DOCG has come under Greek and Roman influence. Its origins date back as far as 800 BC. In spite of Taurasi's ancient origins, however, it is also regarded as a modern wine.

This is largely due to the efforts of the esteemed winemaker Antonio Mastroberardino, who played a huge part in bringing this area to the forefront. His legendary 1968 Taurasi grabbed international attention and, since then, the area's popularity and reputation has soared.